Monday, January 30, 2023 - 4:20 AM
NieuwsActualiteitenNu POLITIEKWill US Senate Crown Netanyahu As Their Emperor? 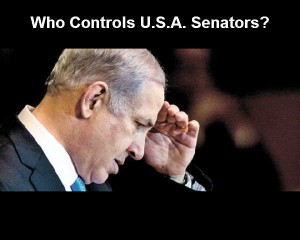 47 Senators Take AIPAC’s Word Over U.S. Intel Community.
The American Israel Public Affairs Committee (AIPAC) has published the list of senators who so far have agreed
to co-sponsor the Nuclear Weapon Free Iran Act of 2013, aka the Wag the Dog Act of 2014. You’ll recall that the
initial list, which was introduced by its principal engineers, Sens. Mark Kirk and Robert Menendez, Dec 19,
included 26 co-sponsors equally divided between Democrats and Republicans, to which newly elected New Jersey
Sen. Cory Booker quickly added his name.
Read more:
Read also:

Post Related to Will US Senate Crown Netanyahu As Their Emperor?

Fiancial Tyranny:Defeating The Greatest Cover-Up Of All Time

If you start learning the truth about Financial Tyranny, you will naturally be branded