What’s The REAL Reason The U.S. Wants To Attack Syria? 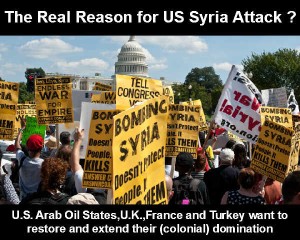 The Syrian conflict is a proxy war being waged against Iran by the United States, conservative Arab oil producers,
and three former Mideast colonial powers, Britain, France and Turkey who are seeking to restore their domination in
the region. Israel, hoping to isolate Hezbollah and cement its annexation of Syria’s Golan Heights, cheers from the
sidelines. Syria and Hezbollah are Iran’s only Arab friends.
Read more:
Lesen Sie weiter:

Post Related to What’s The REAL Reason The U.S. Wants To Attack Syria?

How To Profit From 4 Tech Investing Trends

1. Brace yourself for an advertising shift. 2. Mobile now drives everything. 3. Video