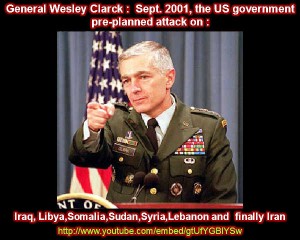 Just ten days after 9/11 the Pentagon was given orders by the Bush/Cheney White House to make plans to attack Iraq and 6 other countries.
Ten years ago, in September of 2001, the US government had their military sights set on Iraq, Syria, Lebanon, Libya, Somalia, Sudan and Iran.
The United States government had already made plans to launch armed attacks against the above mentioned countries — without provocation.
An interview with a 4 star United States general revealed the United States government’s plan for 7 wars of aggression. Three of those 7
unprovoked wars of aggression were to steal the oil and natural gas reserves of the attacked countries. Iraq, Libya and Iran, all rich oil
producing nations, are and will be victims of US and US lead wars of aggression.
There were no weapons of mass destruction or links to the CIA created al Qaeda in Iraq and there is neither in Libya and Iran so the US
government has decided to use CIA recruited and paid foreign mercenaries to start up armed rebellions against the governments of the targeted countries.