Turkish Conspiracy Tapes To Enter Into Open War Against Syria 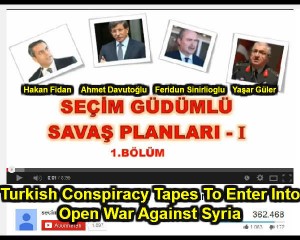 Leaked audiotapes of Turkish National Security meetings, released anonymously on 27 March 2014
through YouTube, reveal the existence of a plot by the Erdoğan government to enter into open war
against Syria. Seized with panic, the administration immediately moved to block access to YouTube
for its citizens, while denouncing a violation of National Defense secrets.
Read more: