The Assassination Of Kennedy And Osama Bin Laden 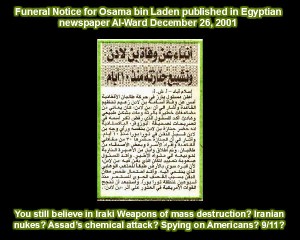 November 22, 2013, is the 50th anniversary of the assassination of President John F. Kennedy.
The true story of JFK’s murder has never been officially admitted, although the conclusion that
JFK was murdered by a plot involving the Secret Service, the CIA, and the Joint Chiefs of Staff.
Read more:

A Funeral Notice for Osama bin Laden was published on December 26, 2001, in the Egyptian newspaper al-Ward.
An English translation is provided below. Anyone fluent in Arabic is invited to verify or correct the translation.
Read more:

Post Related to The Assassination Of Kennedy And Osama Bin Laden