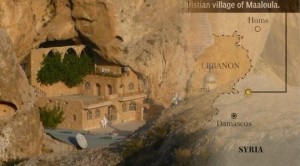 Sporadic fighting continues after Syrian government troops have regained control of the village of Maaloula,
a center of Christianity in the region. RT’s correspondent reports from the village, amid the shooting and fighter jets overhead.
Read more: