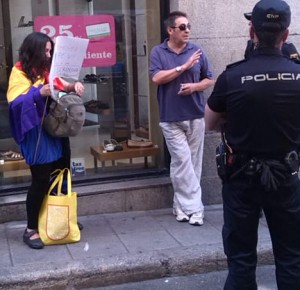 Don’t wear purple and carry a republican flag in Madrid during the inauguration of the “New King”.
The Local’s Alex Dunham has managed to track down a couple of republican’s who were hoping to protest in the centre of Madrid today,
before authorities banned them. Alex says a middle aged woman with a republican flag has been barred from entering Puerta del Sol,
where a demo had been planned.
And a couple of other anti-royals are quite happy Spain were booted out of the World cupo last night.
“We’re glad spain lost yesterday, it would’ve been a tool by the Spanish government to get people to wave spanish flag” said two
republican supporters Isabel and Carlos.
Read more:

We Are Not Charlie Hebdo – Dr Kevin Barrett

On the very night of the Charlie Hebdo attacks, as Bougrab was preparing to