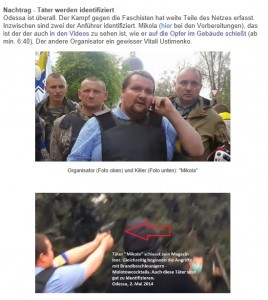 Ukraine’s right wing Nazi “Pravi $$ektor” begin burning down alive Ukraine’s Russians in the Trade Union building in Odessa last Friday, May 2, 2014.
Nazi attackers shout “Let’s burn them down alive in the building”, shooting at the people who tried to escape the fire. Ukraine’s Police
does nothing to stop the violence though they stay right next to the building. People had to jump from the windows to escape fire and suffocation.
Ukraine’s Police intervened just to pick up the dead an wounded, didn’t even attempted to move tires close to the building so the people fall
to them, not to the ground.
Read more:

TigerWoods Has A Rough Start At U.S. Open

It’s not easy fighting the wind and the pin locations, said Tiger Woods. His