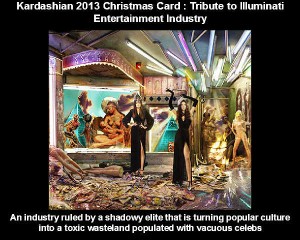 If there was an award for the less Christmas-y Christmas card in the History of the world,
I believe that the 2013 Kardashian Christmas card would take the prize. Shot by elite fashion
photographer David Lachapelle, the card is a rather grim and depressing summation of the
entertainment world – an industry ruled by a shadowy elite that is turning popular culture
into a toxic wasteland populated with vacuous celebs such as the Kardashians.
Read more: