“It’s All Lies” BBC And Sunday Times Fail On Snowden 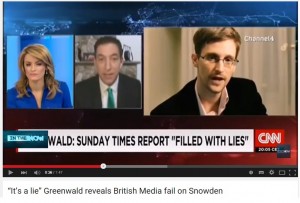 American journalist Glenn Greenwald has pulled all credibility out from under the British media. He claims BBC and Sunday Times who reported Chinese and Russian
intelligence had access to Edward Snowden’s files weren’t true, adding the whistleblower destroyed them before coming to Moscow. But the media didn’t delve very
far and the headlines ran with the story without asking many questions. British officials were quoted, plus bad guys, Russia and China, spying always add a nice touch,
plus, Snowden was smeared. One of the author’s of the debunked report said they print what they think is the position of the British government while the Sunday Times
has filed copyright charges against Greenwald for using a screenshot of the article.

“In the Now” with RT’s Senior Political correspondent Anissa Naouai is the first dedicated nightly Primetime show to air live out of our Moscow headquarters.
Host Anissa Naouai has worked in the field for almost a decade and has reported from over 80 cities across the globe. Now from Monday to Thursday viewers can
enjoy fresh, honest, and hard-hitting news coverage on some of the world’s most pressing issues with one of RT’s most experienced journalists . We’ll put the spotlight
on stories you’ll never hear on mainstream networks or even in RT’s daily news bulletins. “In the Now” – 8pm Moscow, 6pm London, 1pm New York.