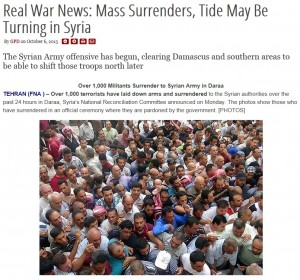 The Syrian Army offensive has begun, clearing Damascus and southern areas to be able to shift those troops north later
Over 1,000 terrorists have laid down arms and surrendered to the Syrian authorities over the past 24 hours in Daraa,
Syria’s National Reconciliation Committee announced on Monday. The photos show those who have surrendered in
an official ceremony where they are pardoned by the government.
Read more here :

Post Related to ISIS surrenders to Syrian Army in Daraa

Each spring, garden shows around the country offer a peek at trends to come.