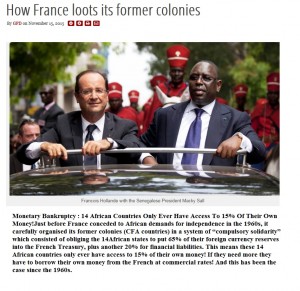 Just before France conceded to African demands for independence in the 1960s, it carefully organised its former
colonies (CFA countries) in a system of “compulsory solidarity” which consisted of obliging the 14African states to put 65%
of their foreign currency reserves into the French Treasury, plus another 20% for financial liabilities. This means these 14
African countries only ever have access to 15% of their own money! If they need more they have to borrow their own money
from the French at commercial rates! And this has been the case since the 1960s.
Read more here :

Post Related to How France Loots 14 Former Colonies In Africa

The three-day visit of Chinese Premier Li Keqiang to India, starting on Sunday, will