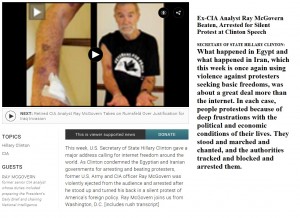 Hillary Clinton Lectures Trump While Police Abused 71 Year Old at Her Speech
Hillary Clinton has excoriated Donald Trump for failing to stop a supporter from roughing up a protester during a speech,
saying “This kind of behavior is repugnant. We set the tone for our campaigns — we should encourage respect, not violence.”
Yet, in 2011, she did nothing to stop security personnel from brutalizing a 71-year-old veteran who stood silently with his back
to her during a speech.

The protester, Ray McGovern, a retired Army officer and CIA analyst, was wearing a black “Veterans for Peace” T-shirt, when
he was set upon within sight of Secretary of State Clinton, who ironically was delivering a speech about the importance of
foreign leaders respecting dissent. The assault on McGovern left him bruised and bloodied but it didn’t cause Clinton to pause
as she coolly continued on, not missing a beat.
Read more here :