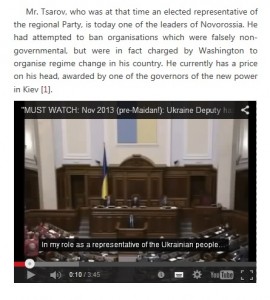 On the 20th November 2013, in other words, the day before the decision by the Ukrainian governement not to sign an agreement of association with the
European Union – a decision which served as a trigger for the events of Maïdan (Independence Square) – a Ukrainian deputy, Oleg Tsarov, speaking
from the podium before the Assembly, denounced the preparation of a civil war by the United States ambassador, Geoffrey R. Pyatt.
Read more here:

Five years ago I posed the question, “Has the Web and the Blogosphere ushered