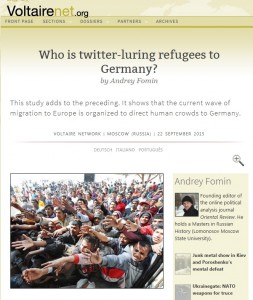 Content-analysis of a great number of tweets that triggered the ongoing wave of migration from Turkey to Germany since August this year
suggests that these human streams were inspired and channeled from outside of the continental Europe.
According to Vladimir Shalak [1] from the Russian Academy of Science who developed the Internet Content-Analysis System for Twitter
(Scai4Twi), his study of over 19000 refugees-related original tweets (retweets discounted) demonstrates that the vast majority of them
mention Germany and Austria as the most refugee-welcoming countries in Europe:

Lesley Stahl on U.S. sanctions against Iraq: We have heard that a half million