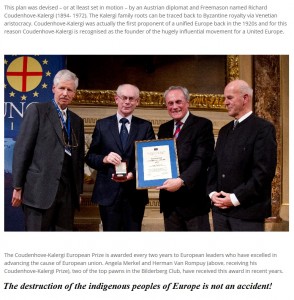 Illegal Muslim refugee trafficking now creating chaos at the Greece-Macedonia border, and the constant flood of boats arriving from Libya,
reveal a network that uses structured routes that seem unstoppable as they generate money for the mafia, corrupt politicians and the terrorist
organisations involved like ISIS. Meanwhile, much of the migration flood through Libya is of Africans, all pouring in to a Western Europe whose
population has already been dramatically transformed by six decades of mass Third World immigration and the relentless promotion of mixed
marriages by the mainstream broadcasters and advertising agencies.
This scenario seems to fit perfectly with a now not-so-secret plan of the New World Order known as the Coudenhove-Kalergi Plan for the most
anti-human and anti-Christian elite schemes in history: The ‘painless’ but systematic genocide of the native peoples of Europe.
Read more here :

Ahead of Premier Li Keqiang’s visit to India next week, state media have launched

Son and Daughter of President Erdogan Are ISIS Gangs