Wednesday, February 8, 2023 - 4:58 AM
NieuwsActualiteitenNu POLITIEKAIPAC Steering Democrats And Republicans Away From US Peace Deal With Iran 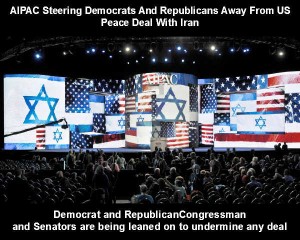 Only three months ago, the White House was drooling for a war with Syria, but it failed. To save face on the international stage,
President Obama and John Kerry have tried to rescue America’s dwindling reputation as an honest broker by striking a groundbreaking
nuclear ‘peace deal’ with Iran. That effort is now being run off the road by a foreign lobby. Both Democrat and Republican Congressman
and Senators are being leaned on to undermine any deal – by a political veruca embedded in Washington DC.
Read more: